The Catalan lollipop made its first appearance in 1958, when the company founder Enric Bernat hatched the idea of placing a bonbon on a stick. He called the product “GOL,” imagining the candy as a soccer ball and the open mouth a net. It didn’t go over well. So Bernat hired an ad agency that renamed his product “Chupa Chups” (from the Spanish chupar, meaning “to suck”). All that was left was the branding. In 1969, Bernat complained about what he had while having coffee with his artist friend—none other than Salvador Dalí.

The painter went to work immediately, doodling for an hour on newspapers that were laying around. Dalí’s version masterfully integrated the wordmark into the daisy design, and has hardly changed since. And Phaidon points us to one subtle, extremely smart feature of the design:

Acutely aware of presentation, Dalí insisted that his design be placed on top of the lolly, rather than the side, so that it could always be viewed intact. It’s proved to be one of the most enduring pieces of branding ever and one that’s still used today, over six billion sales later. 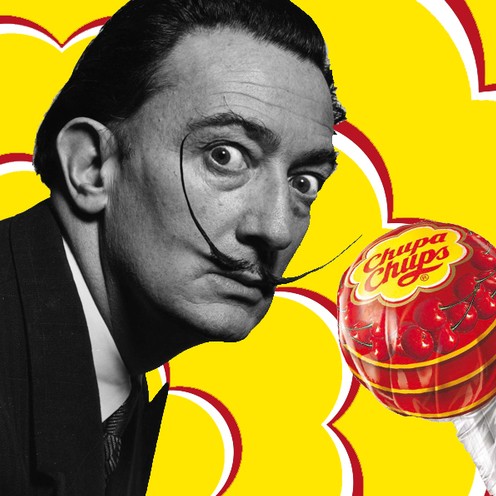 Please enter your email address if you would like us to keep you up-to-date with our news, latest product releases, competitions and special offers.